John does it again. I’ve been waffling on this issue, but am leaning toward phone encryption. John Oliver’s report on the subject isn’t only hilarious, it’s balanced and informative. And there’s a great mock iPhone ad at the end that sums everything up quite well too.

And I still don’t like that terrorism is used as the justification for unlocking encryption. I think that religious white males with access to firearms would be a better tactic.

11.22.63 is a Hulu original series. It began in February and consists of 8 episodes. Starring James Franco, and directed by Stephen King and JJ Abrams, it tells the story of your average man presented with an outstanding opportunity to try and stop the assassination of President John F. Kennedy.

I think anyone in their right mind enjoys watching Franco act. He comes across as a natural in his roles – even the crazy ones (Spring Breakers) – and this mini-series is no less true. And honestly, I’m really really really hoping for a Seth Rogen cameo.

What I really appreciate about this show is the emotionalism captured between the characters. Without giving anything away, there’s a scene where a man shows concern for a woman who has been beaten by her husband. The two are mostly strangers. Few words are exchanged. He gives her a cigarette, lights it for her, and she rests her head on his. What made it so compelling is that you could see the care he has for her with his heavy breaths.

I think what sets the stage for some of the emotional connections is the connection of 21st Century global values with 1960s American values. They’re starkly different. The 60s present themselves as an archaic and terrible time, but also as an era that presents some truths that would still be nice to see today. For example – the humanity Franco’s character shows to a black woman is unheard of in that time and moving when he sets himself apart from the era. Also when a man of that era, also Franco’s boss, insists Franco be a man of honor and dignity by making him suffer the fruits of his trouble causing is noble in a time where there are so many secrets.

To wrap it up, the show is just incredibly good. It’s the first thing that I’ve liked coming from Stephen King’s TV productions in a long time. I’d say it could be his best. And that could be because Abrams is involved.

This is a great little video explaining gravitational waves and the significance of their discovery.

Sometimes one picture expresses how I feel better than one thousand words.

Absolutely Anything is a really funny, cute, and thoughtful movie. I think it’s probably my favorite Simon Pegg film just because of the level of thought that is put into the ridiculous scenario of a man being granted the power to do “absolutely anything” by a group of aliens that judge the worthiness of discovered life.

Robin Williams plays the voice of a dog, Dennis. While his bit is funny, it is made bittersweet knowing the man has gained the knowledge of the Great Secret.

Check out the trailer, then watch the film if it appeals to you. I think it’s delightful.

I have been looking forward to this movie for a while now. He Never Died stars Henry Rollins (of Black Flag & Rollins Band) in this film about a troubled man who has to struggle with being sober for a while in order to find his daughter.

There’s an element of mysticism to it as Jack is supposed to be Cane or a fallen angel, but I’m not sure which. The trailers have been incredible. I’ve always enjoyed Henry Rollins and look forward to seeing how this movie goes.

You can get it on iTunes now.

In lieu of the old yule log, just use this 5-hour video of the Vader log. Recommended settings: 1080 on the biggest screen possible. 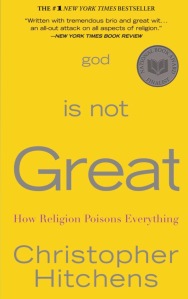 A must read for believers and non-believers

A truly enjoyable book to read. Essentially, religion ruins everything: medicine, peace, equality, etc. Hitchens speaks not just as a well-read intellectual, but as someone who has literally trudged through the trenches of war. As such he offers a well informed world-view and his observations should not be taken lightly.